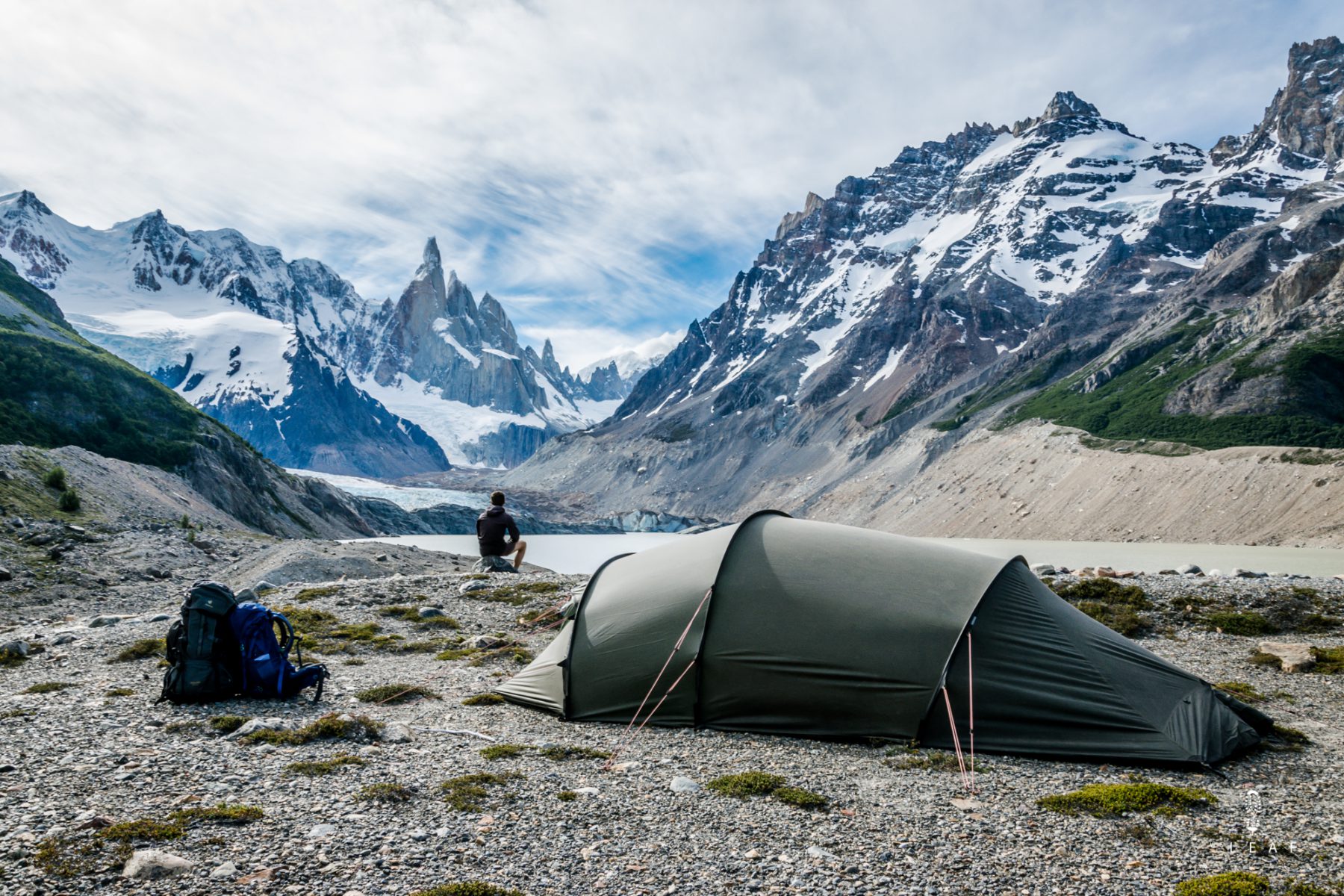 Quickly we take a quick selfie in front of the sign 'Fin de la Carretera Austral', with a shot of whiskey off course. Then we board the ferry which brings us to the other side of the O'Higgens lake, together with the bunch of international cyclists. The last ferries were canceled so we are with a group of thirteen cyclists to make the challenging crossing. The boat trip has a medium risk for sea sickness, but luckily Olivier doesn't feel anything, instead it is Zoë who's happy to arrive, although the whiskey could be part of the reason. From there on the adventure starts. The first fifteen kilometer is manageable with the bicycles, with only pushing on some steep parts, but then de dirt road changes into a muddy hiking trail. Right there our cycling computer says 10.000 kilometers. Who would ever think that we would cycle this much. The first thing Olivier says 'let's do 10.000 more!'. 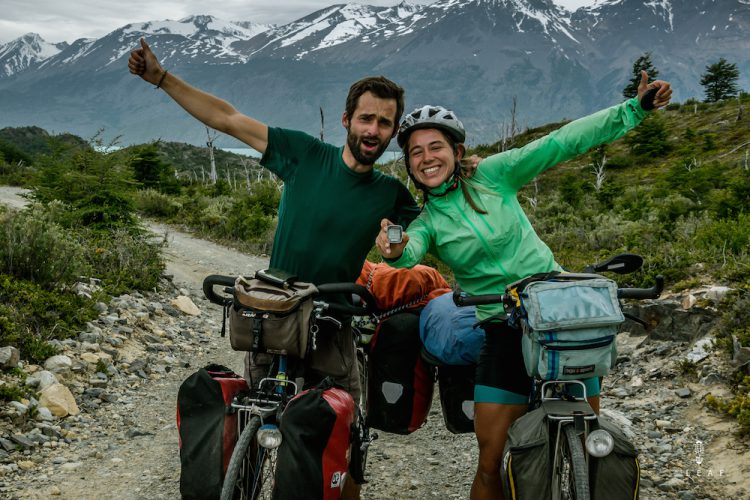 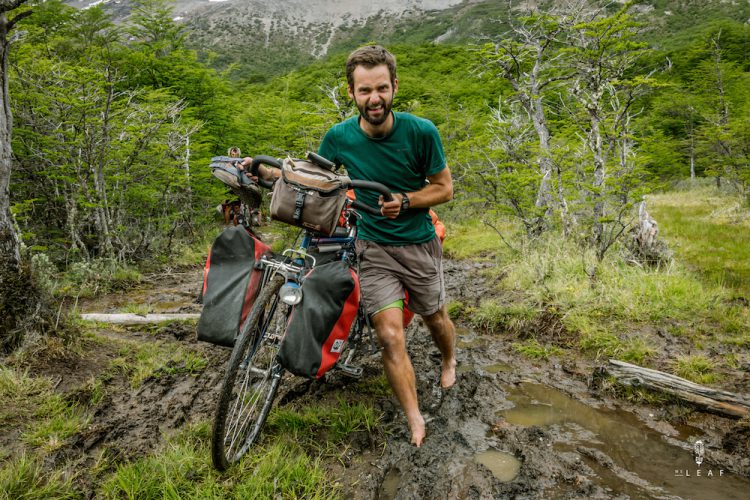 The six kilometer long hiking trail is famous among cyclists. We take our shoes of and start walking with the bike. After a hundred meters the fun starts when we have to cross the first river. After this we plow through the mud, push the bicycles on steep hills, climb our way over fallen trees and drag us through narrow gutters where the bicycles barely fit. It is exhausting, but pure joy for us. After every corner lays a new challenge, sometimes it looks impossible and we trace the least difficult part. From the other side we meet some hikers we says astonished 'we never expected those bicycles here'. After five hours we plop the bikes in the grass at the lago desierto and see the mighty Fitz Roy on the other side. One after another, the other cyclist arrive, the one exhausted, the other with a big smile. A couple of months ago we said to each other 'we will never do this crossing', but now we can only smile. The last forty kilometer are tough, until a black and smooth surface arises at the horizon. It feels great to see some asphalt after 500 kilometer of dirt roads. That deserves a kiss! 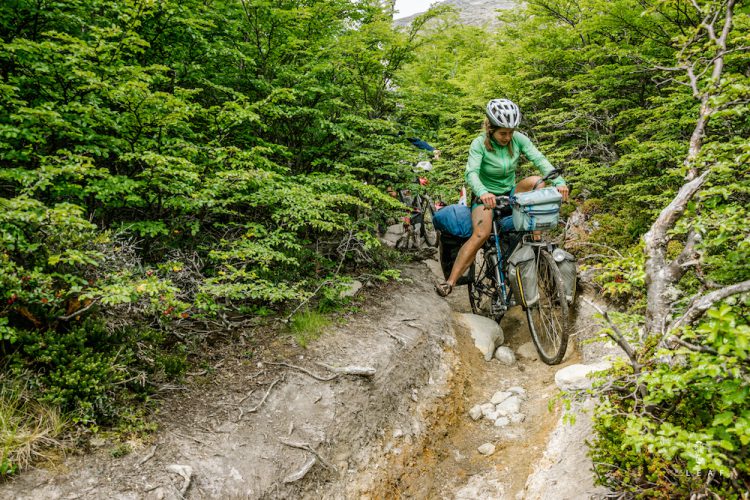 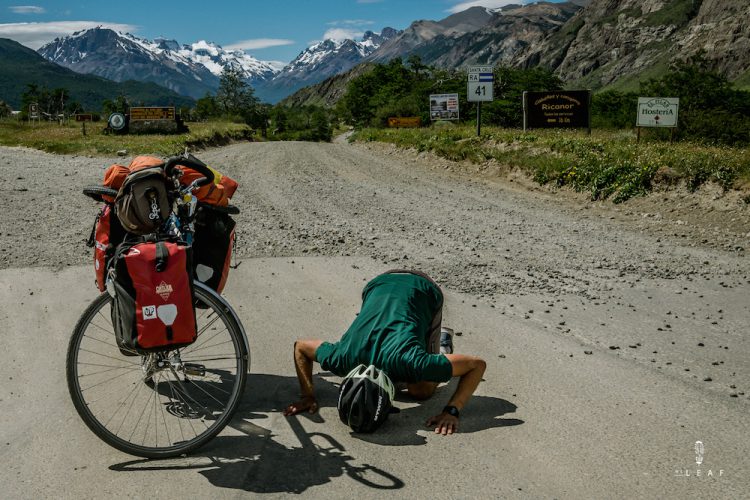 In El Chalten we change our bicycles for the backpack. The world famous Fitz Roy arises above all other peaks like a real icon. Next to Fitz Roy stands Cerro Torre, on of the most difficult ascents in the world. The first three we hike the traditional circuit along those two celebrities. It is crowded with hikers, but in the evening they are warm in their three star hotels, while we sleep in our tent on a five star location. We meet Bernd and Bernard for the last time and the three gentlemen take a dive in the ice cold Laguna Torre, watched by a bunch of astonished tourists. Our second hike is far more challenging. We rent climbing gear because we have to cross some rivers with a zip line. The circuito del huemul is a four day hike crossing the Paso del Viento and the Paso de Huemul. We register in the national park office, have to show all our gear and need the bring back the registration form when we return. If not, they will start a rescue mission to find us. The first day is long, but not to heavy. We have to take of our shoes a couple of times to cross a wet field or an ice cold river.

The second day starts with the adventurous river crossing. We are lucky when a group of Austrian mountaineers arrives on the other side, who help us to reach the other side safely. After a lot of climbing we finally arrive on top of the Paso del Viento and are astonished by the views. The Southern Ice Fields, the largest ice mass on earth near the equator, stretches to the horizon. In front of us we see the birth of the Viedma Glacier which is squeezed out of the ice. It is unbelievable to see so much ice, while it is warm and dry thirty kilometer to the east. We follow the Viedma Glacier until it flows into the Viedma Lake were it looks like a giant ice dam which blocks the lake. The giant ice blocks that break of the glacier drift to a little bay. A dream location to pitch the tent, a d for Olivier to have an early new years swim. With scratches on his legs he comes out of the water. The ice bergs appear to be much bigger under the water. The last day we hike 25 kilometers back to El Chalten, the end of a successful expedition. 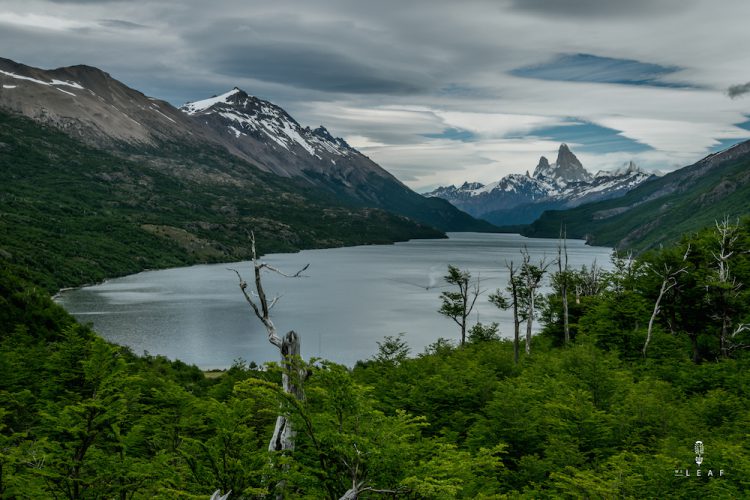 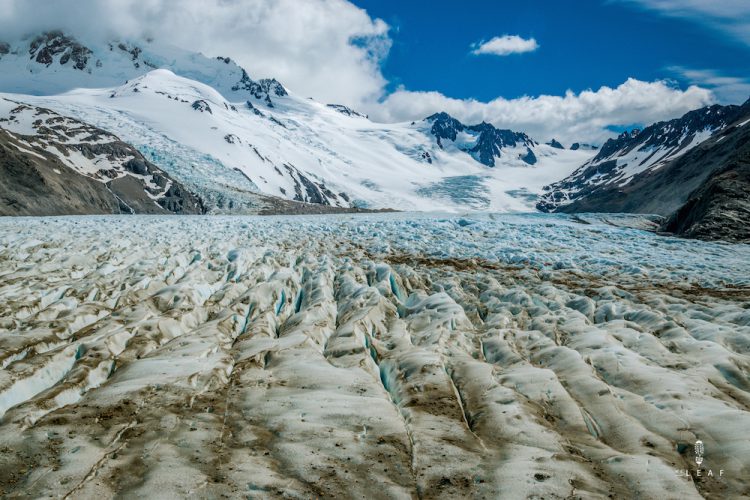 We don't treat ourselves with a resting day because the winds appear to be in favour for cycling. We have to cross the Patagonian pampas to the Atlantic ocean. 450 kilometers of deserted grassland with literally nothing. Several Argentinians warned us, 'hay nada, pero nada nada' (there is nothing, absolutely nothing) and one Warmshower described it as a cemetery for cyclists. Generally the wind blows from the mountains to the coast so we hope this we be our life guard to survive the cemetery. Our first goal is the pink house, about 125 kilometers from El Chalten, a distance we never cycled before. The first 90 kilometer we cruise out of El Chalten with a nice tail wind, but then we turn against the wind. The last 35 kilometers take as long as the first 90, until we finally see a pink house. It is an abandoned restaurant, which is now converted into a famous stopover for cyclists. There are no doors and windows, but it looks remarkably clean. The walls are full with hundreds of names from other cyclists who passed here. All those tired legs of all the other crazy cyclists give the place a special atmosphere.

The next day we skip the turn off to El Calafate, which we will do later with Olivier's parents, and have to do a last long climb. The wind we hoped for isn't there, but instead replaced with one of god's punishments, a mosquito terror. We aren't able to cycle fast enough uphill to get rid of the biting bugs, and soon we are surrounded by hundreds of the terror machines, who bite and eat your flesh. Olivier screams, trying the hit the flies away, and sprints the 15 kilometers uphill as fast as possible. We already did 75 kilometers but stopping for lunch would be suicide. Exhausted, almost starving and with a hundred bites on our body, we fall down on the top. Even a strong head wind would be better than this nightmare. We continue until we find the only house on the route, a post for road workers, where we can pitch our tent under a roof. 129 kilometers, another record day. The tailwinds don't come and change into a head wind instead. On the long stretched roads the trucks mark the next curves far away in the distance. Besides some guanacos, a wild lama type, an ostrich and a fox who can't hide himself, there isn't any distraction for the body pain. Hands and feet start to sleep, our butt can't find a position anymore and our shoulders are burning. In the only village on the route, La Esperanza, we take some rest in the gasoline station. A young man sees us eating some small breads, and offers his plate with a giant hamburger. We must have been looking very hungry. It starts to rain so we decide to stop today and put the tent in the garden of the gasoline station. 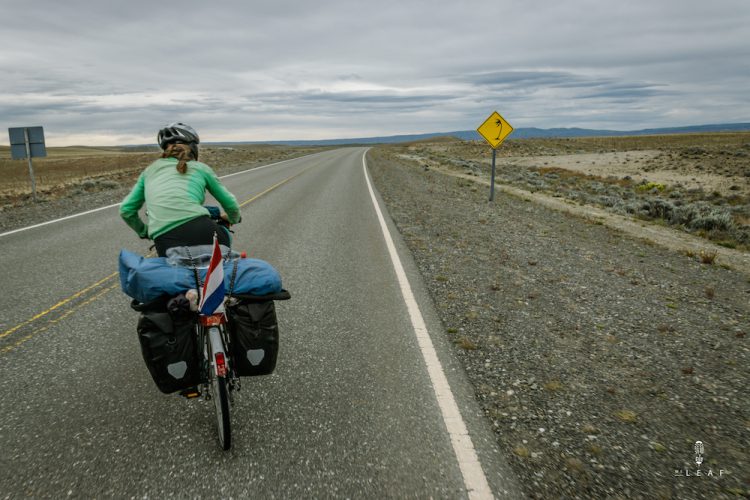 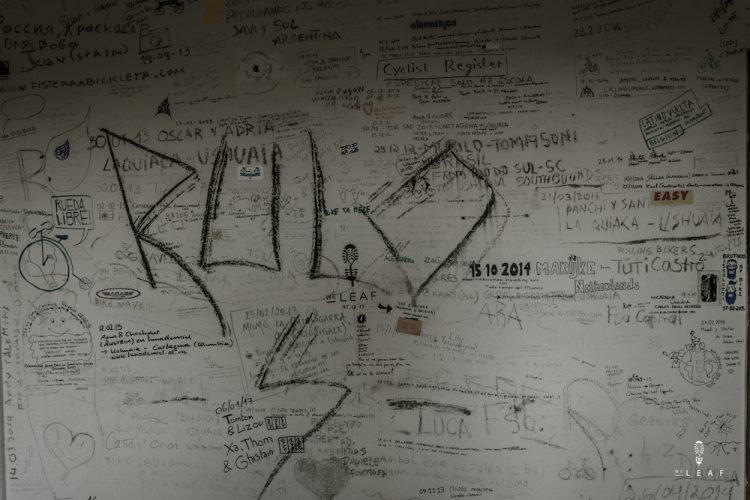 We are only 70 kilometers away from the touristic cycling route and are special again. In the morning we receive freshly baked empanadas and the hamburger man returns to give us some pesos. The landscape might be boring, it is always compensated by the human experiences. We have on last stage to survive the desert, 145 kilometers to Rio Gallegos. We hoped to have more wind, but with an average of 28 kilometers an hour, we can't complain. A new record for the last time. 470 kilometers in four days, that deserves a rich meal, but unfortunately our timing is bad and we arrived again on a Sunday and everything is closed. It will be pasta with veggies again, our usual meal. The GPS tells us we are at 600 kilometers from Ushuaia. We are getting really close! 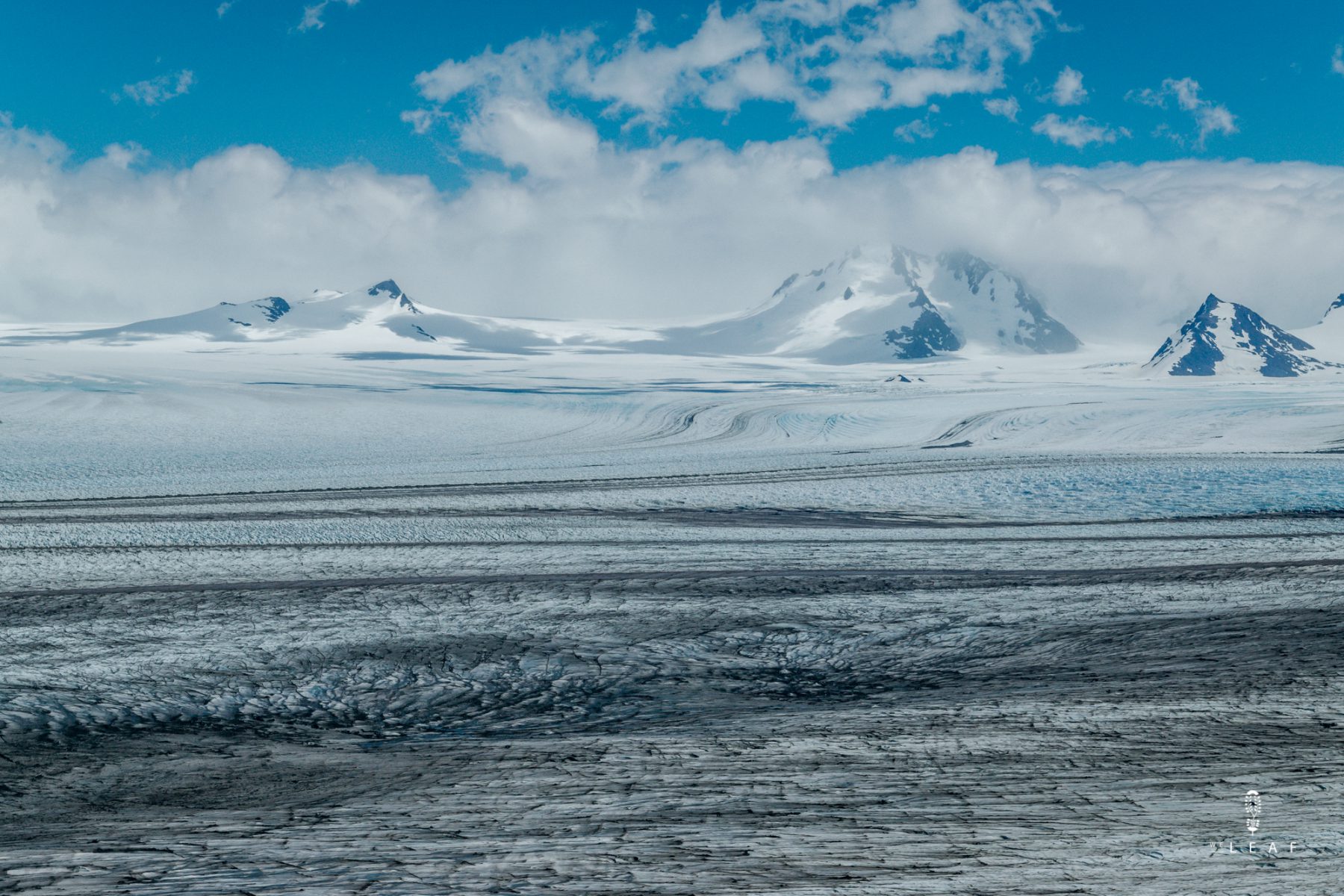