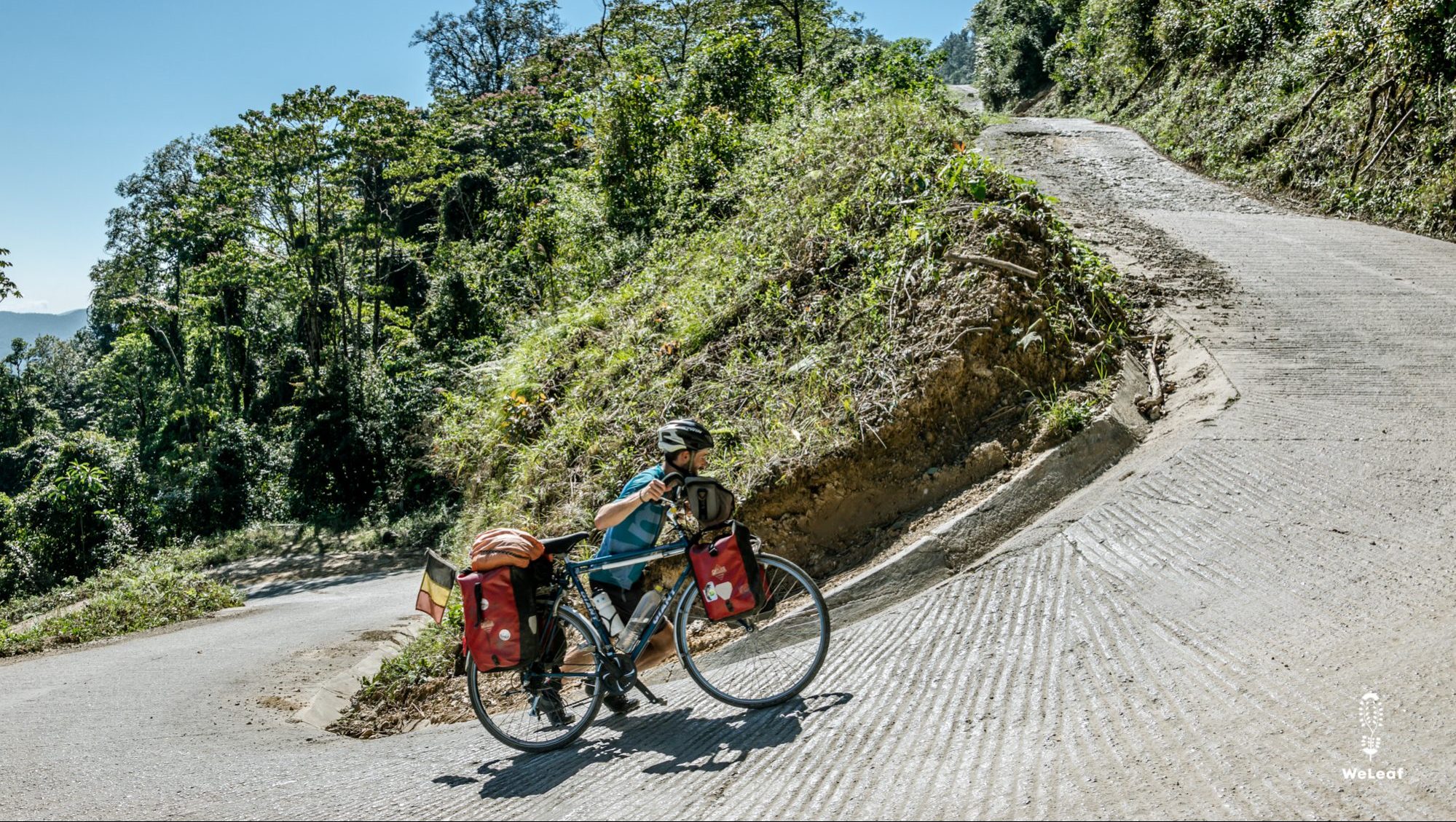 If you can’t outrun them, outsmart them

"Still asphalt," Zoë says laughing as she looks back at Olivier. It can stop after every curve, but for now we enjoy every black meter under our wheels. The asphalt ends after 35 kilometers, but that is better than any guess we have heard today. When we come up after a long unpaved climb, we see burnt-out bulldozers and trucks everywhere. A little later we pass an army barracks and there are more police cars than there are people. Surprised, we ask what is going on. "A group of locals are fighting against a dam. It exploded a little bit and three people were shot in two months', the policeman says in the improvised restaurant where we have lunch. That explains the soldiers and all the police. Leon, the son of the cook, hears that we are from Belgium and he asks "does Eva still live there?" "Eva?" we ask surprised and Olivier tries to remember a famous Fleming named Eva. "No, Eva, she helped in the hospital here a few years ago," Leon says. He probably never understood that Belgium is a country and not a small village like that where he lives. Disappointed with the answer, he fires another question. "Did your boss send you here?" We say we don't have a boss and we cycle on this road for pleasure. He cannot believe that, and certainly not when we say we are going to Mexico. "Impossible" he says "solo con moto" (only with the motorcycle) he assures us. As far as he is concerned, it is impossible to climb the mountain. "Then we push the bike up," we say with conviction. 'No se puede' (you cannot do that). We start to doubt a bit due to its certainty, but we also know that the advice of locals about the roads is not reliable. "Shall we pitch the tent by the river and leave very early tomorrow?" Zoë suggests, "if we really have to push, I'd rather do it in the morning”. We prepare mentally for a tough day, although we could never have prepared for what really came. 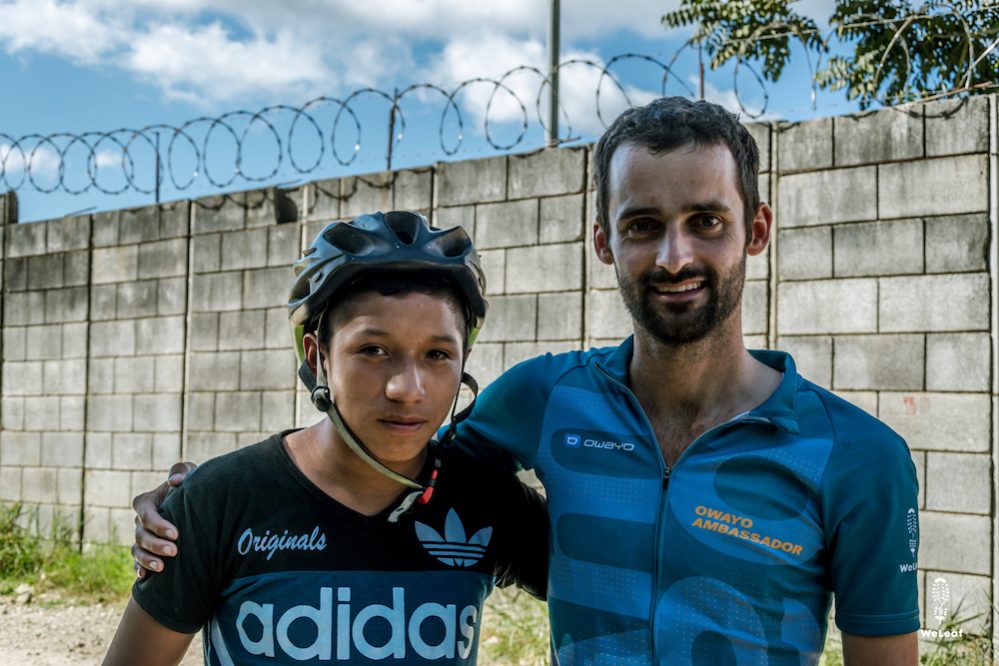 At six o'clock in the morning we stand next to the tent. It is fresh and the dusk slowly disappears. We cycle again past the army barracks and the same restaurant where we had lunch yesterday. They are already preparing breakfast and we can fill our bottles. "Mucha suerte” (good luck) says Leon quickly. People's mouth falls open as we cycle past and they stare at us in disbelief. The first kilometers are not too bad, until we see two concrete strips glued to the mountainside. "Is that the road?" Zoë asks with big eyes. With full energy we cycle onto the concrete strip, but twenty meters further we stand still. "I think pushing is easier this time," says Olivier, and his theorem has failed. He claimed that cycling is always easier than pushing, not so. Slowly we push the bike up the steep slope, 25% says the GPS. After three steep sections we are gasping. "This will be a long day," laughs Olivier. Pushing together is easier than alone. We push one bike one turn further and then go for the other one, turn after turn after turn. Seconds after seconds, minute after minute, hour after hour. Just breathe, and go on. We continue to push through and through, because the breaks make the day even longer. Occasionally a motorbike passes by, and even a van squeezes itself up with great difficulty. People look at us in surprise or stop to give water when we hang over our handlebars. Our legs are souring from pushing, our arms hurt and the sun is getting hotter. "Already 7 kilometers since this morning," says Olivier when we are working four hours. 'We are almost at the top of the first part', Olivier tries to encourage Zoë. But that "almost" becomes three kilometers, and that takes an hour and a half. 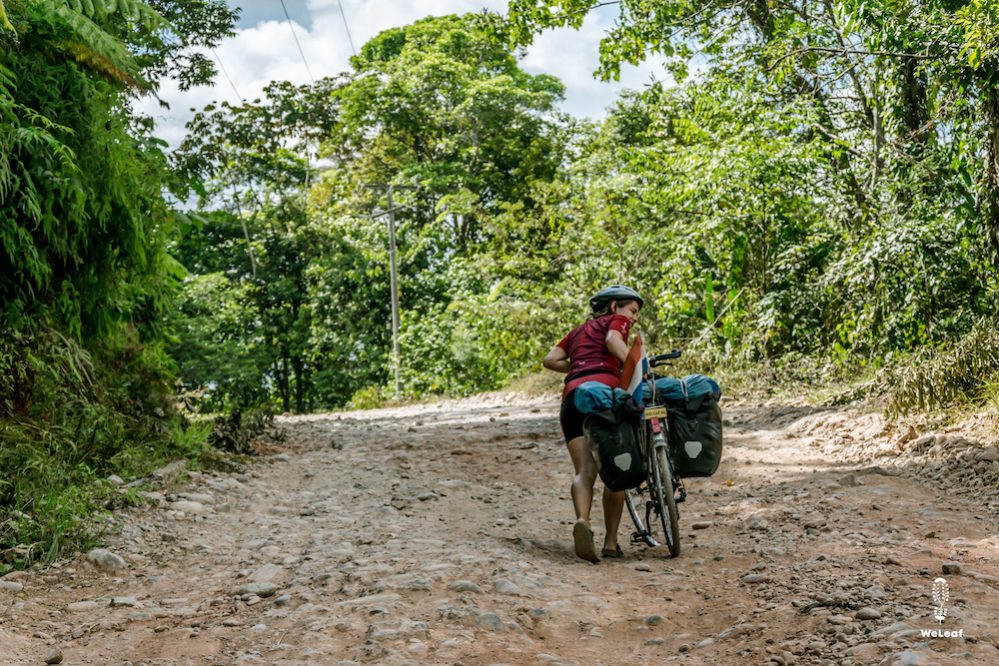 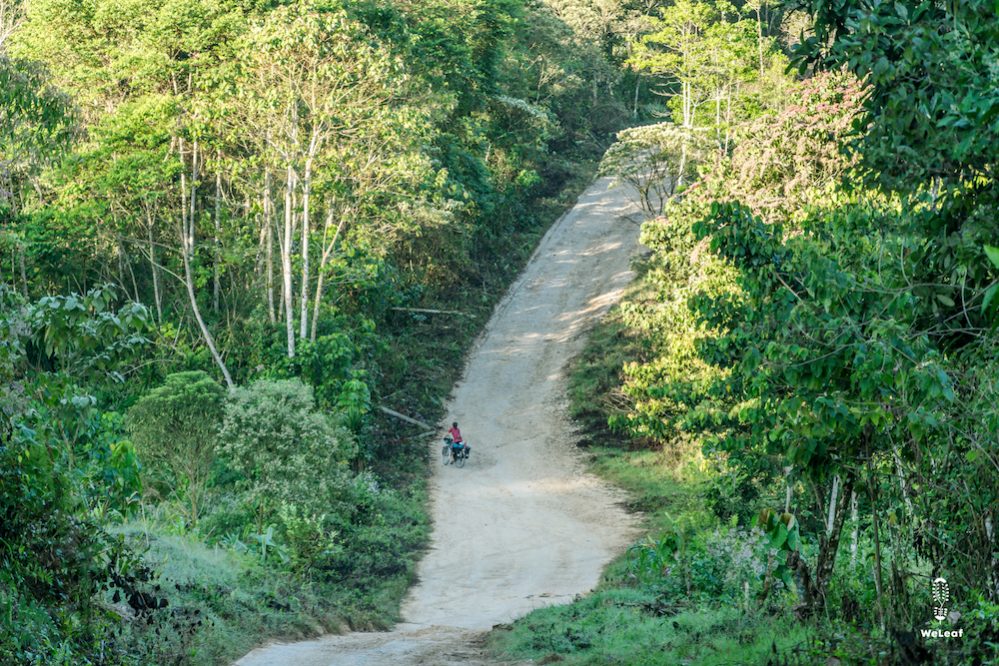 "Where can we have lunch?" We ask a lady standing in front of her shop. "Not in this village. The next place is Aguacuate, about 15 kilometers from here". We have oatmeal as emergency food, but something else would still be tasty. We ask a few houses if there is food available somewhere, but we cannot find more than a pack of cookies. Suddenly a young man says "you want to eat?" And asks if we like noodles with tortillas. "Where did you learn English," we ask with amazement. "I lived in America for eight years," he adds, "illegally." He tells how he was smuggled across the border and about the hard life in the US as illegal. His brother is still there, but he himself learned about the value of his own life in the small village and returned. “To enter the US is difficult, but if you want to get out, they will gladly let you go," he laughs. Meanwhile his mother makes some tortillas on a wood fire and we are served a bowl of noodles. Not the most nutritious meal for the effort that we have made, but we can continue again. "One more climb, he says, and then it's flat.”. Since South America we have taken the word "flat" with a whole bag of salt. Flat is anything but flat, but perhaps from a bus or motorcycle everything seems flat. The road descends steeply, so steep that we have to walk that part too, and then push it up for miles. There seems to be no end when we suddenly arrive at an intersection with an asphalt road. "This is not possible, where does this road suddenly come from" and we kiss the asphalt.

"We've done 15 kilometers in eight hours," says Olivier as we sit on the asphalt and stare at the GPS. "Yet another record has been broken," Zoë laughs. Olivier looks at Zoë with admiration. "You were on the operating table two months ago and now you do this. That's a miracle!" "You are so strong in your head, and how amazingly much a body can be." A small smile appears on Zoë's face, who enjoys being able to suffer again, to push her limits and to act at top sport level. But above all, to receive a nice compliment. We cycle another ten kilometers to a river, but every climb is too much. We have to get off again and again and push the bike up. The river is ice cold, but a godsend, just like the pack of cookies, the pasta and the tent. 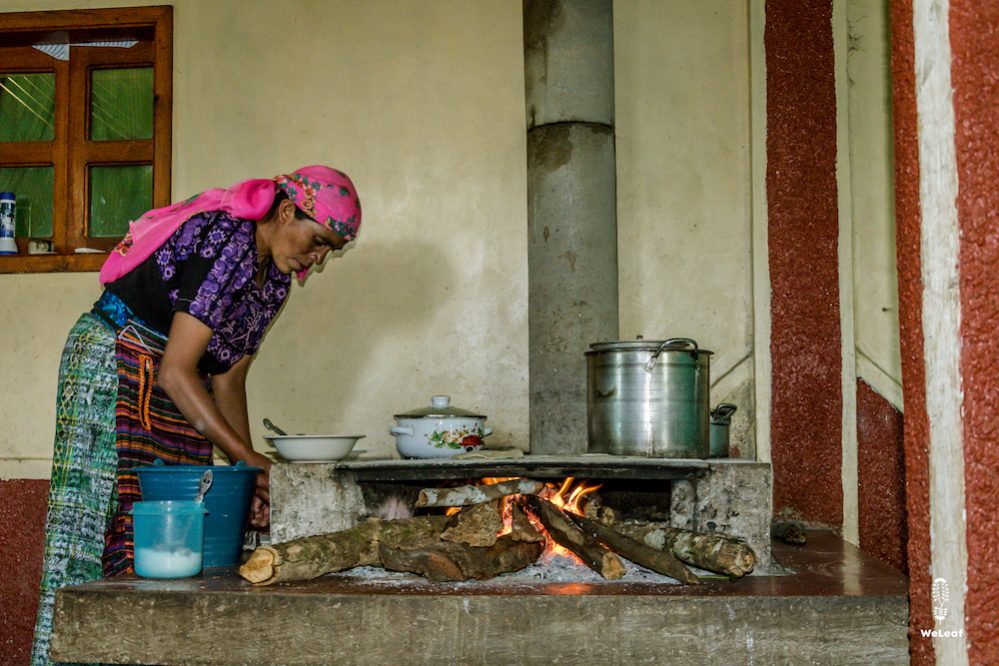 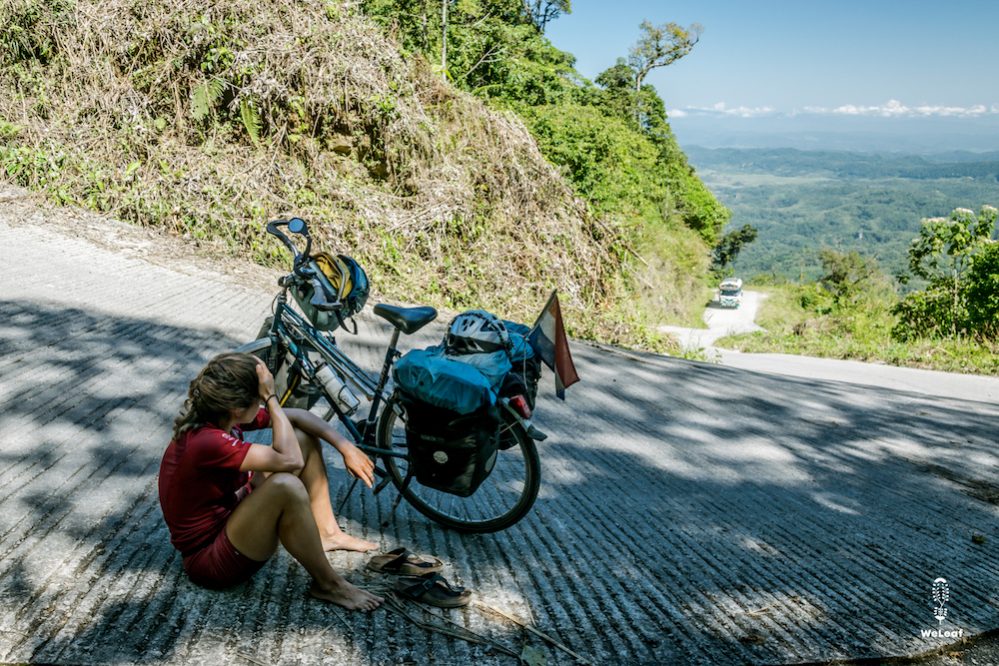 The last kilometers to the border are a breeze compared to yesterday. After ten days we leave Guatemala again, although we wanted to stay much longer. Having a strict goal helps us to move forward, but also ensures less flexibility. We still search the right compromise. We can leave Guatemala without any problems and enter the customs office of Mexico. It is a small building, enclosed between a taco restaurant and a hardware store. "You must go to the other border for a 180-day stamp." This can not be true. Have we completed the mission impossible and is this man is sending us back? 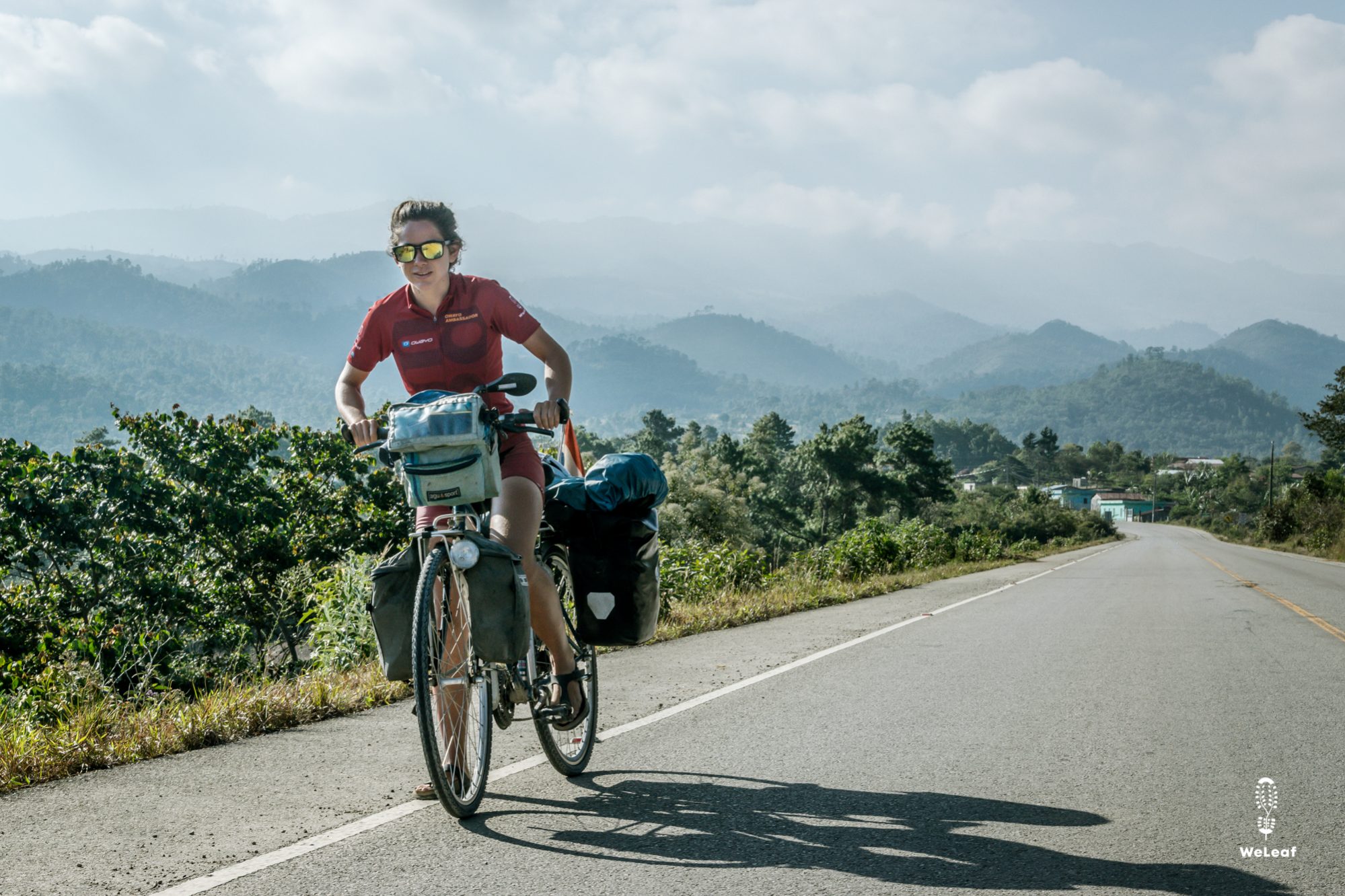