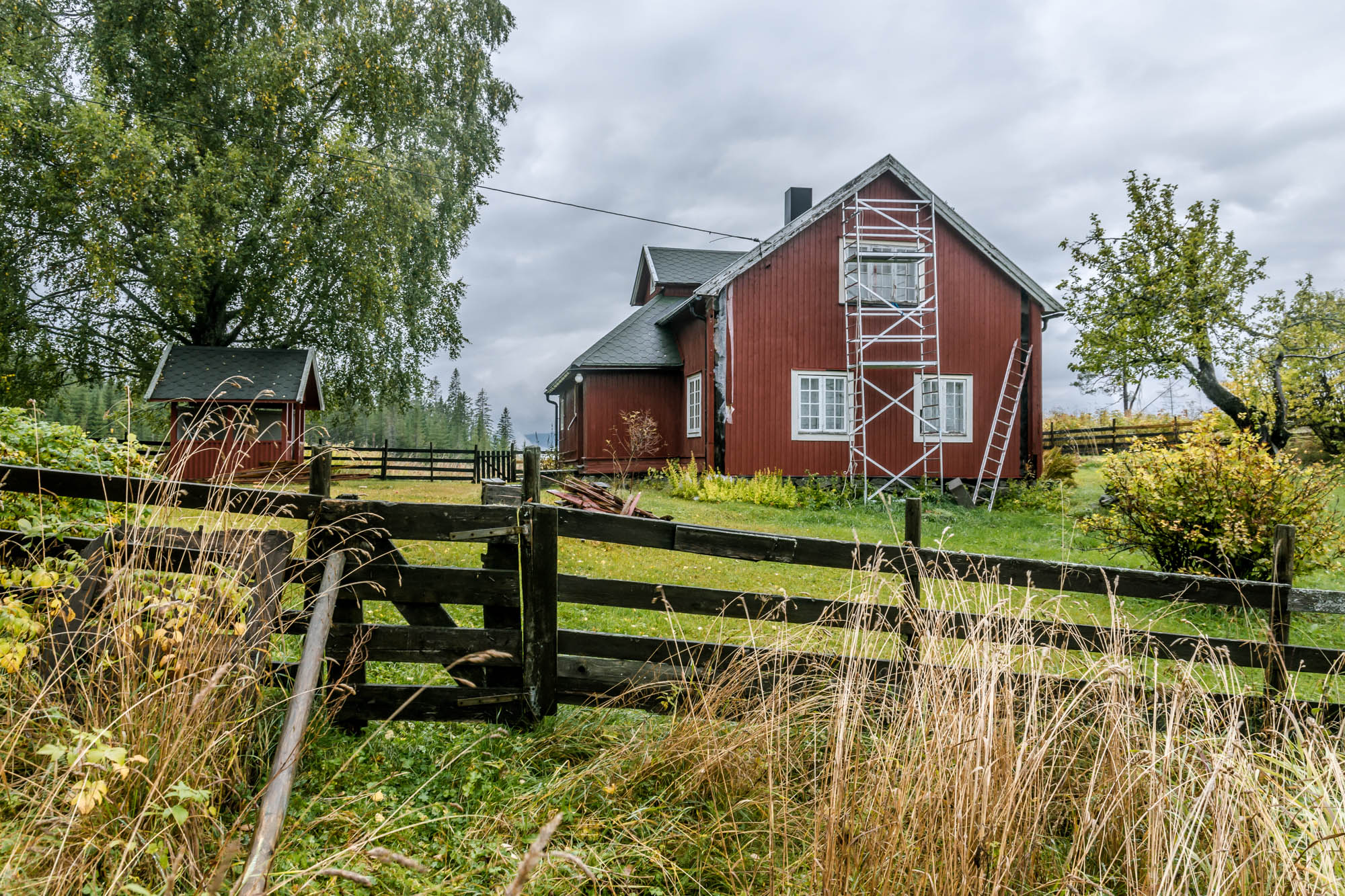 From afar we can see that it all matches. This is Basecamp-X, this is our dream. A cute, red house at the end of a road, surrounded by forest and overlooking the hills (picture at the bottom). This is exactly how we envisioned our dream, how we visualized it on Zoë's mood board. Could it be that we have found our place? Pers' house is a dream place, but this is the perfect picture. The rain taps on our running clothes as we jog into the yard with Peter. Peter knows that an artist lived in the house for a long time, but he hasn't seen him in a long time. He doesn't know who the real owner is, or if the house is in use. We peek through the windows, even that is perfect. Through one of the windows we can see a letter lying on the windowsill. On it is the name of a man, probably the owner of the house. We store the name in our memory and follow Peter to the next place.

There, too, is a beautiful red house with great views (Picture on top). Peter immediately tempers our expectations and says it is a vacation home of a family in Oslo. It has been family owned for many years and people visit regularly.
"I don't think they will sell," Peter says honestly.
Our minds are still on the other place. That will be it, that is our dream place, but it is nice to feel that there are several houses in this area that we can fall in love with. That gives us a reassuring feeling.
At home, Olivier begins his detective search on Google. The search yields hardly any results, perhaps because the man is already old and has not yet left any digital traces on the Internet. There is one search result in which the name appears, a newspaper article from the local newspaper in Lillehammer. To read the article, we need a subscription. We ask Lena, a friend from Lillehammer if she can open the article for us. Tomorrow morning we may know more.

We get a series of screenshots of Lena and discover that the newspaper article describes all the real estate transactions in the Lillehammer area. That's how it works in Norway, you can find everything about a person; how much he earns, where he lives and what the house costs. One is the house on top of the hill, transferred from the old man to a woman. She has the same last name so we think the house may have been transferred to the children. Soon we find a Facebook profile and the woman's phone number. She must be the husband's wife. It gets even better because we read on her Facebook that she is moving to another city! We dream, we dream very big. While Zoe is already typing a message and leaving a message on voicemail, Olivier discovers something else. Barely one month ago, the house changed hands again. The farm through which the road to the house runs bought the house. Zoe bursts into tears, her dream shattered, we are too late. Olivier remains positive and hopes that the farmer bought the house for the sake of the land. Maybe we can only buy the house. Zoe still has tears in her eyes as she writes a message to the farmer's wife. She can't believe it. One month, if we had been one month earlier....

Barely half an hour later, the farmer, calls us. She tells the whole story. Ingrid grows up on the farm and lives there all her childhood. When she is in her early twenties, she moves to Spitsbergen for a while and works in a mine as a cook. There she meets Jacob, a man from the province of Trondelag. In Norway there is the Odelsrett, which means that the oldest son or daughter has priority in the sale of the farm. Ingrid is the oldest daughter on the farm so when her parents wanted to sell the farm, she gets the first chance. Ingrid and Jacob buy the farm and return to Brøttum. The house on top of the hill has always been occupied by a couple with no children. Ingrid comes there regularly and the house feels like part of her childhood. Three years ago, the old man falls ill and the old couple decides to move to an apartment in Brøttum. The house is occasionally used by the wife, but no one actually lives there anymore. At the end of 2021, the old man dies and the woman is left alone. She has no children and her only sister lives about an hour and a half from Lillehammer. The woman is lonely and wants to get away from Brøttum. The old house is just a burden to her that, in addition, carries with it the loss of her husband. She finds an apartment in her sisters' town, sells her apartment in Brøttum and she sells our dream place to Ingrid who gets it for a cheap price.

Ingrid loves our story and our philosophy of life. The idea that we do as much as possible by bicycle appeals to her. She bought the house to have control over the road leading to it. After all, she doesn't want a rich family with three cars driving down the road through the farm and cows all day. That we do everything by bicycle is music to her ears. Ingrid tells us that she is overjoyed with "her" house, but that it is also a financial burden for her. She wants to rent it out to us, but we immediately tell her that we want to buy it. A brief silence follows, after which she quickly says she doesn't want to sell it. She suggests we get acquainted and visit the place together. We start dreaming and coming up with a plan of how we are going to convince her. 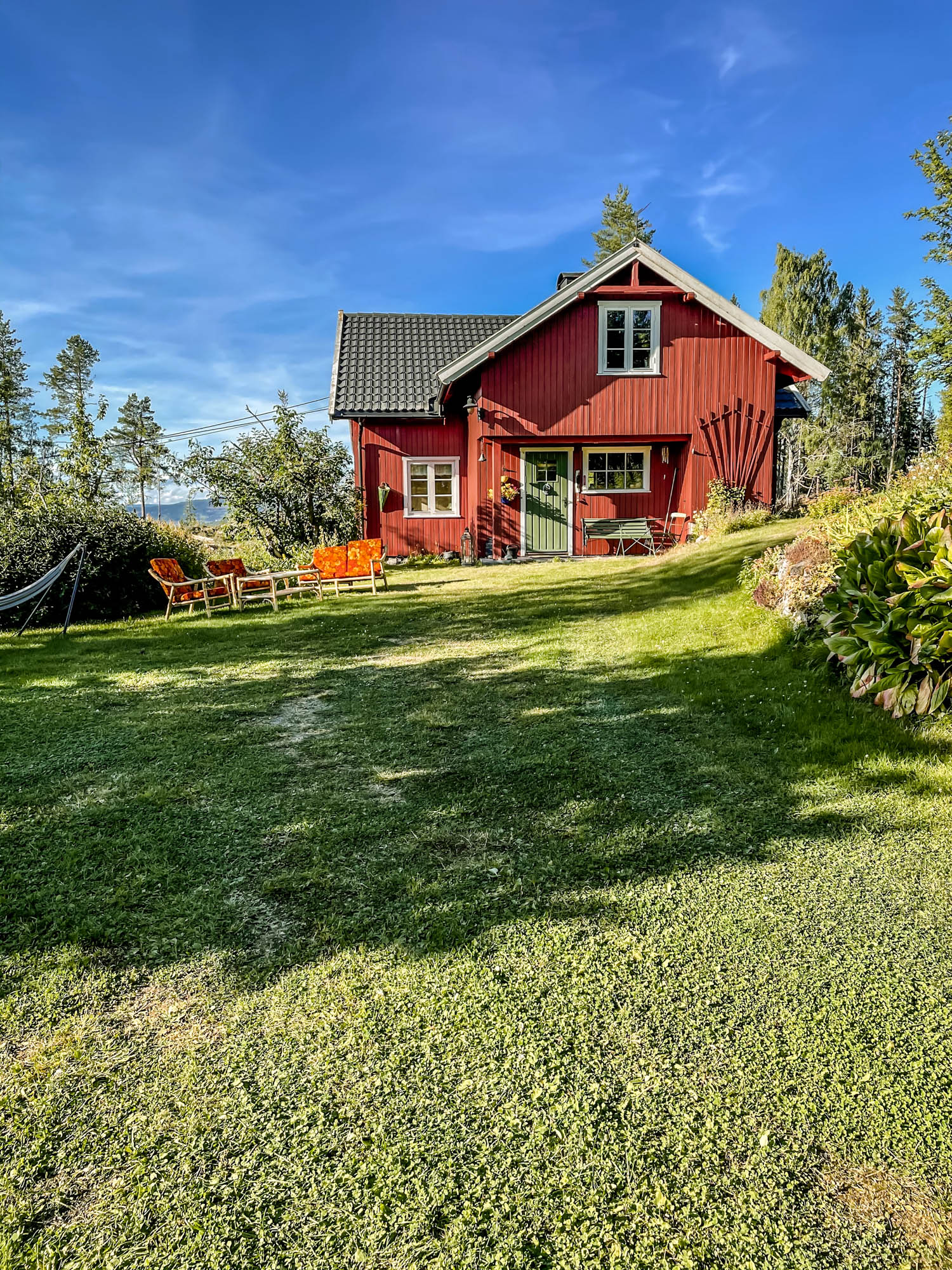